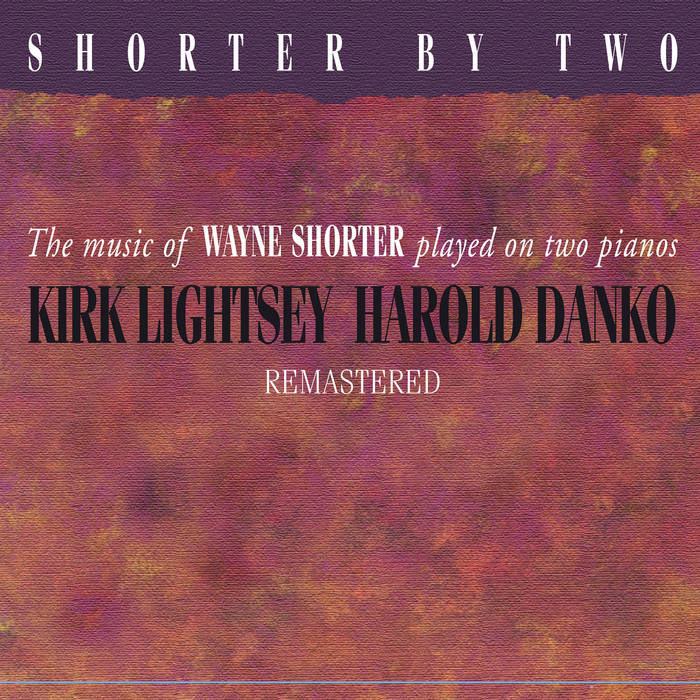 Shorter by Two: The Music of Wayne Shorter Played on Two Pianos, originally released in 1984, and reverently reissued and remastered, features Kirk Lightsey and Harold Danko interpreting eleven selections from Shorter’s stupendous songbook, from 1959 to 1974, featured on his magnificent albums as a leader on the Blue Note and Columbia labels, as a sideman for Miles Davis and Freddie Hubbard, and as a member Art Blakey’s Jazz Messengers.

“Wayne’s a true composer,” says Danko. “He writes tunes that stay with you. He utilizes melodic ideas and develops them in subtle ways. And he uses all of the great harmonic things that developed in the twentieth century. And as Kirk and I explored on the piano, we found that it was compatible with our classical and jazz backgrounds. You can develop what he’s written. But you don’t have to add anything. ”

The pairing was profound and provocative, with Danko, the lyrical, Ohio-born, keyboard meister who worked with the Thad Jones/Mel Lewis and Woody Herman big bands, Gerry Mulligan and Lee Konitz; and Lightsey, The Detroiter, straight out of Tommy Flanagan, who played with Dexter Baker Gordon, Betty Carter, and Woody Shaw. Both pianists worked with Chet Baker and bassist Rufus Reid, and were a part of Sunnyside’s history. Danko recorded Mirth Song, the label’s first release, and Lightsey released several well-received albums on the label, including Lightsey 1 and Lightsey Live! His encounter with Shorter’s music was more direct. “I played with Wayne in a group that included Cecil McBee and Roy Haynes when I first come to New York,” Lightsey says. The pianist also played with Shorter in concert at William Patterson College in 1984, which was broadcast on the American Jazz Radio Festival, with Reid and drummer Steve Bagby.

Deciding not to pan their pianos in a left/right channel mix to emphasize their pianistic unity. “When I listen back, sometimes I can’t quite identify who’s who,” Danko says. “My sound is more linear. If there’s a baseline, it’s probably me. And Kirk’s [playing] is much more textural.” Lightsey and Danko mine Shorter’s melodic and harmonic gems, striking gold with every note. “Ana Maria,” a tribute to Shorter’s wife, and “El Gaucho” dance with bossa nova/samba syncopations. In contrast, “Delores,” and “Pinocchio” swing at the speed of sound, while “Marie Antoinette” gallops with a mid-tempo, Gallic gait. “Lester Left Town,” Shorter’s tribute to Lester Young, is turned into a futuristic, boogie woogie, while “Iris,” and “Dance Cadaverous,” impressioned after Jean Sibelius’ “Valse Triste,” are rendered by Lightsey and Danko in ¾ time. On “Armageddon” and “Nefertiti” the pianists slow the tempo down to a Hitchcockian crawl, with dramatic and chilling effect.

After the recording’s initial release, Danko and Lightsey performed this music in a number of live settings, including the Montreal Jazz Festival, and in Paris and Portugal. And, in the last few years, Danko invited Lightsey to the Eastman School of Music to play for his students. With the reissue of this sumptuous, sonic gem, a new generation will hear this music with new ears. And, they may demand an encore, as Kirk Lightsey teases: “maybe it’s time for another Shorter By Two!”

Bandcamp Daily  your guide to the world of Bandcamp